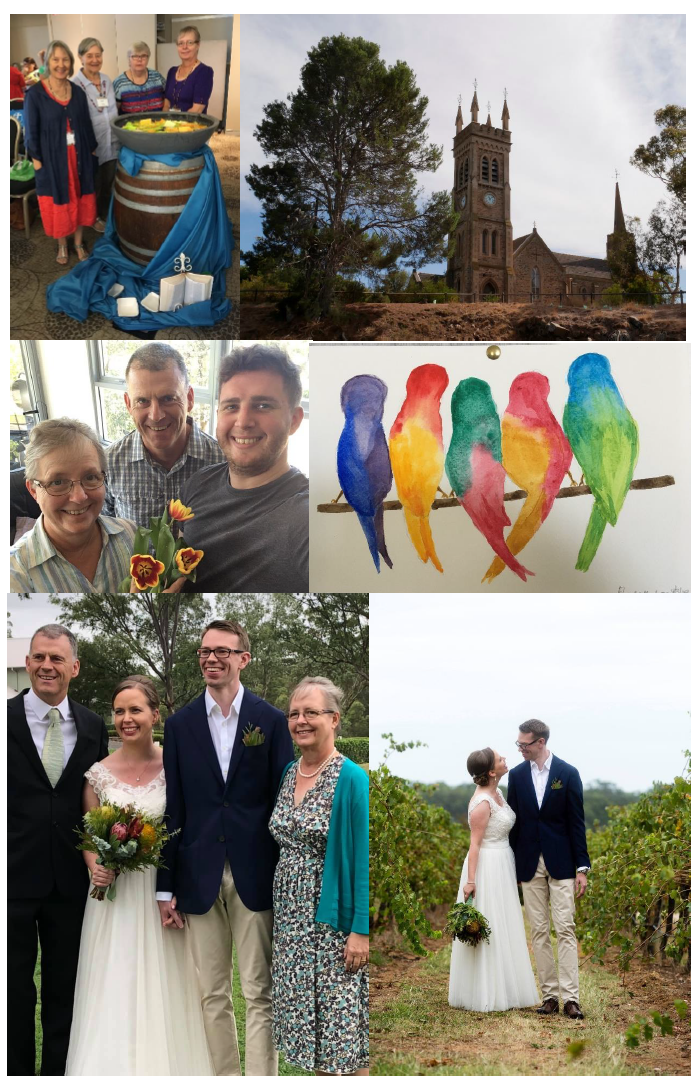 Oh where have the days and weeks gone? How can one be so busy, so quickly after returning from sabbatical and not returning to paid full-time employment?
Well, the photos above may in part explain.

A fortnight ago, I along with 3 other women represented The Grail at the Australian Catholic Women’s Colloquium and I followed this with a relaxing few extra days in the Adelaide Hills enjoying the company of a friend.

Soon after my return to Sydney we began offering hospitality. First in the form of our twice-yearly apartment block drinks and nibbles evening where the residents of our 19-block apartment are invited to gather on the oval adjoining the apartments. My commitment to fostering community in my local area has increased since my return.

Then we met our daughter Maria’s soon to be in-laws from England over an Aussie BBQ complete with kangaroo sausages and Pavolva. We were then delighted to welcome our son, Michael, home from Amsterdam, for a flying week-long visit. And the festivities continued as we travelled to the Hunter Valley, 3 hours north of Sydney for a beautiful intimate wedding celebration for Maria and Tim. The hot weather abated for THE day and we had a fantastic celebration under the gum trees with the vineyard beyond.

Also, in these past weeks, I have continued with weekly watercolour painting, yoga and Feldenkrais classes, and monthly writing workshop, bushcare and Grail activities, as well as the Spiritual Exercises in Daily Life.

And I am in the midst of planning 2 reflection days and 2 workshops as well as continuing to explore possibilities for Spiritual Accompaniment with those in the fringes. I had hoped to be posting more on the latter but alas….

I will conclude this blog posting with my refection on the Australian Catholic Women’s Colloquium held in Adelaide at the end of last month.

Maybe a positive starting point for my reflection on “Stirring the Waters: The Australian Catholic Women’s Colloquium” is not the Colloquium per se but rather our Grail “Celebrating Women” liturgy with which we honoured International Women’s Day and witnessed the commitment of Margaret Hetherton as a Grail member last Saturday. For this liturgy we used a number of prayers and readings from the liturgies of the Colloquium, most notably the post-resurrection appearance of Jesus to Mary of Magdalene.

Unlike, the Easter Sunday proclamation of this scriptural text, when only half the story is told (Jn20:1-9), we contemplatively reflected on the whole story as it appears Gospel of John (Jn20:1-18) including the encounter between Jesus and Mary and Jesus’ commissioning Mary as Apostle to the Apostles. We wondered if the story, as it has been handed down to us, might not be being experienced in the now. The two male disciples, disbelieving the account of a woman, ran to the tomb, racing each other to get to the tomb first. Then finding things as Mary had told them, the tomb empty, they left the scene, believing her account. However, Mary lingered, weeping, present to the pain of the empty tomb, staying with her grief. And God responded not only through the appearance of the Angels but in the presence of the stranger, the gardener, whom Mary came to recognise as the risen Lord, when she heard her name called.

On this past Saturday, 20 homilies were spoken into the room in which we gathered. The deep, insightful and rich sharings, filling the room with tremendous energy – reminiscent I suspect of the day of Pentecost 2000 years ago.

And likewise, there was such rich sharing at the Adelaide Colloquium from the keynote presenters, the workshop presenters and the participants in formal and informal conversations over the two and a half days. The energy of the Spirit was palpable. But I am questioning if the words of those present will be heard? The bishop with responsibility for the Office of Participation of Women was only able to be present for part of the Friday evening. How do the bishops hear the women weeping, if their representative is unable to be fully present to the women at this National gathering? Has anything changed from the time when the Gospel of Mark was written down? As Dr Michele Connolly rsj pointed out to us only one of the 9 women referred to in this earliest of Gospels is actually heard speaking. The remainder appear silent, or in one case, what she said is reported by another. I fear the voices of the 160 women will also loose their power as time passes, just as the voices in the research project “Woman and Man; One in Christ Jesus” commissioned by the Australian Catholic Bishops Conference 20 years ago have not been heard. Nor the voices in the subsequent 2000 Social Justice statement, or the 10 Anniversary Report, or the voices at the previous colloquiums. Despite much weeping and many words shared, there has been little positive change for women in the Church in the past 20 years.

Yet I also heard the stories of passionate young and older faith filled women committed to responding to the call of God in their lives, be that as: a CEO of an NGO; a mother caring for elderly parents, young children, disadvantaged neighbours; leaders in Catholic Education systems and Catholic health agencies; women who struggle with addictions and homelessness; Aboriginal women passing on culture and faith as elders in the community; disillusioned chancellors of dioceses, parish associates, university lecturers; nuns who have faithfully committed their lives in service of the Kin-dom of God through their various congregations; country parish associates; and so many more.

So, despite so many women offering not only their time but also their compassionate, listening presence to one another, I left Adelaide with two intertwined emotions, although one dominates. Incredible anger and faint hope. While doing little to quell my anger with the Institutional Church, the days in Adelaide have offered me a glimmer of hope that the church will flourish regardless of the Institution. For in the words of Miriam Therese Winter “one by one…, side by side…, hand in hand…, women of the world… we are bound to make a difference” for “We are the place of God’s indwelling, we are the church. We are a people.” And just as Mary of Magdalene was, “We are called to bring Good News to birth. We are the peace. We are the promise of love outpoured to renew the Earth.” Maybe, just maybe, the one hundred and sixty of us really did have the opportunity to “Stir the Waters.”