Walking as Guests of the Earth 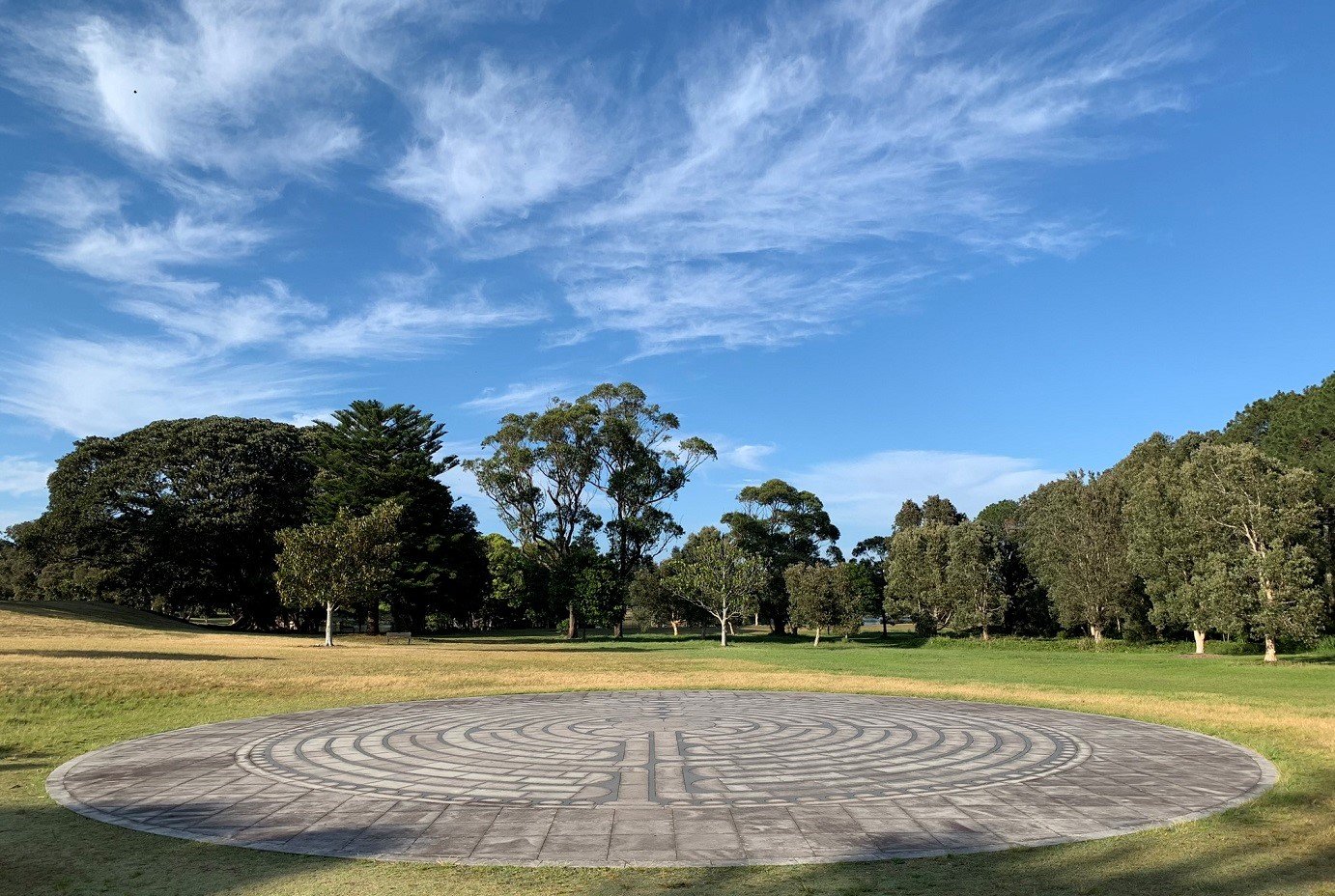 At Centennial Park in Sydney there is a wonderful Labyrinth.  On the first Sunday of each month there is a community labyrinth walk facilitated by various people with interest and passion for labyrinths.  Today I had the privilege of facilitating the walk.

No one really knows how old labyrinths are.  Maybe the songlines of Aboriginal Australia could be considered the most ancient of labyrinths- a network of invisible pathways that traverse this ancient land, turning this way and that, incorporating sacred sites, lore, culture and understanding of mother earth.  Labyrinths have appeared in nearly every culture across the globe.  The classic 7 circuit labyrinth has been in existence for about 4000 years, while the Chartres labyrinth, of which the Centennial Park Labyrinth is modelled on, came into prominence about 1000 years ago is still in the floor of Chartres Cathedral in France.  The Centennial Park Labyrinth was officially opened in September 2014 and the community is much indebted to Emily Simpson who had the vision and energy that led to it’s creation of this labyrinth.

Frequently, labyrinth facilitators will say that there is no right or wrong way to walk.  But these days we need to walk the labyrinth with sensitivity to social distancing.  In addition, today I was very intentional about the walk I offered- I invited participants to walk as “guests of the earth.”

We commenced by becoming aware of the land on which we were standing.  Land that belongs to the Gadigal People.  Earth on which the Gadigal people have walked upon for generations.  Earth that they have cared for and Earth that they have returned to when they died.  It has been so for at least 60,000 years.  Land that is their Mother.  Land that provides them with all they needed for life.  This land that was taken from them without their consent, treaty or compensation.  We are guests upon their land.  May we walk gently upon this land.  May we walk as guests.

This land on which we gather, this land of planet Earth, came into existence some 4.5 billion years ago.  We are just guests passing through this place.  We are invited to accept the hospitality of Earth.  So, we walked this labyrinth intentionally as a guest of the earth.

Before entering the Labyrinth, participants were invited to take some soil, some earth and place it in the pot.  If possible, placing the earth into the pot with bare hands, although gloves were available.  Participants were invited to experience the earth.  Feel its texture, its moisture, its odour, its temperature.  To become aware of the microorganisms living in this soil, revitalising the soil.   And to consider how this soil has been recycled across the millennia.

The pots of soil were carried with awareness into the labyrinth, a gift from Earth.

In the centre of the Labyrinth were some native plants, some Warrigal Greens, also known as Botany Bay spinach or New Zealand Spinach.  Often found growing along waterways and in the sand near beaches, growing in sunny to shady spots, thriving on neglect.

The green triangular, fleshy leaves of Warrigal Greens are bush tucker, and can be used the way you would use spinach, silverbeet or bok choy.  Simply remove leaves as needed harvesting regularly to encourage growth.  Like with spinach, the leaves are rich in oxalates, so should be blanched or cooked before eating.  The small yellowish flowers that appear in Spring and Summer; may be eaten too.

At the centre of the Labyrinth the Warrigal Greens were tenderly transplanted into the pots of earth, all the while appreciating their gift to us.  Grounded in Earth they, like all plants produce oxygen, offer nourishment and provide shelter for life on earth.

Participants then walk out of the labyrinth, with a gift from the earth, guest of the earth.

The reason I chose the theme for today is because today 4 October.  It is the day that we celebrate the life of Francis of Assisi.  Francis had a love for creation and a love for the poor.  He is the patron saint of those who promote ecology.  He offers an example of genuine and deep respect for the integrity of creation.  I concluded with a saying from Francis of Assisi “Start by doing what is necessary, then do what is possible and suddenly you are doing the impossible.”