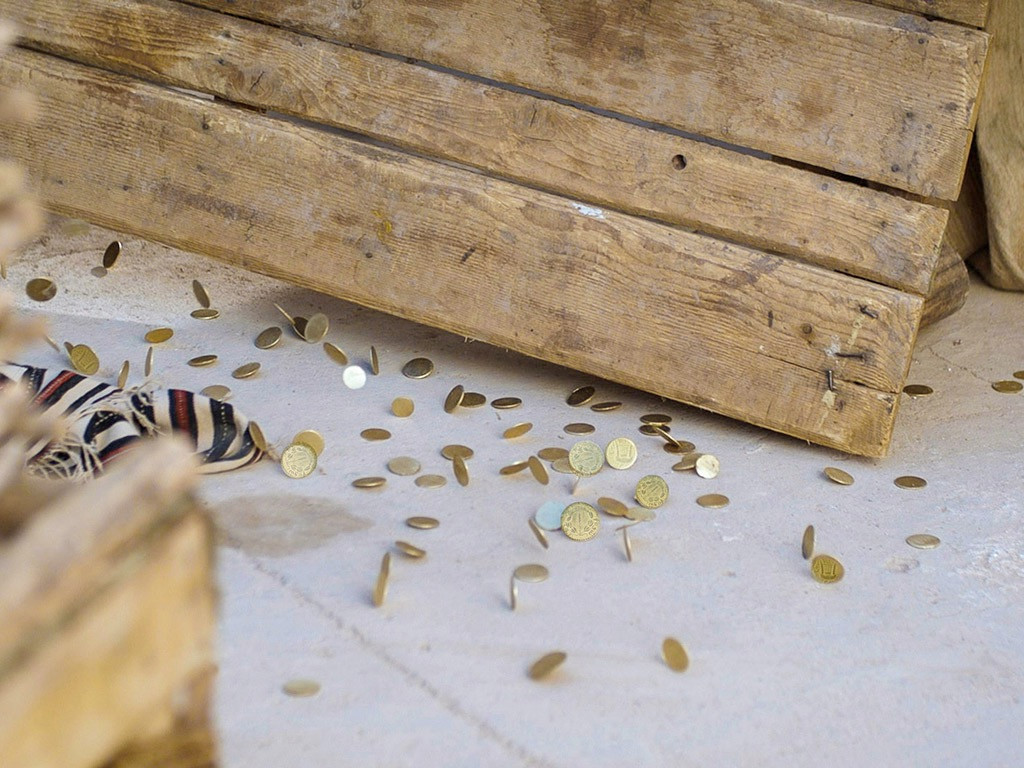 It seems apt at the beginning of Holy Week to share my reflection on the Upturning of the Tables in the Temple by Jesus.  It was the reflection I offered on the 3rd Sunday of Lent at Pitt St Uniting Church.

Did it really happen like that?  Jesus goes into the Temple in Jerusalem, just before Passover and drives them out of the Temple.  It is hard to imagine that is how it happened given the enormous size of the temple courtyards, more expansive than 4 football fields.

When did it happen?  The writers of the synoptic Gospels place the story at the beginning of what we call Holy Week, the day after Jesus entry into Jerusalem on a donkey, giving the temple authorities a reason to look for some way to kill Jesus (Mark 11:18)    But the writer of John’s Gospel places the event soon after Jesus is cajoled into public ministry by his mother at the Wedding Feast of Cana after which Jesus then travels to Jerusalem for the Passover Festival.

Why did Jesus drive out the people, cattle and sheep with a whip and upturn the tables, scatter the coins of the money changers in the Temple?  I don’t know.  It is obvious that he was angry about something, but what exactly?  There were no TV anchors crossing live to reporters asking what had happened, how Jesus was feeling and what alternative options Jesus could have considered in the circumstances.  After all he was causing a ruckus in the week of the Festival.

But that has not deterred many scholars and commentators postulating various reasons for Jesus behaviour that day.

Some common interpretations are:

But this is all speculation.  We just don’t know.   One can ask did the event even take place or did the story develop and circulated in the early Christian communities.  Then the Gospel writers then used it to serve a particular purpose for which they were writing, some decades after the death of Jesus, with the writer of John’s Gospel having a different purpose in mind when he placed it at the beginning of the Gospel compared with the synoptic gospel writers.   And what difference would it make to us if the story never actually happened?  Do the facts of the story really matter?

For me, whether taken from the Canon of one of the religious traditions, or handed down to us by Indigenous elders, or arising from the pen of poets, playwrights and authors in more recent times, Sacred Stories, are not just offered as a witness to what happened but are rather an invitation to enter more deeply into Mystery.  And that is why I will return to another interpretation of this story a bit later.

But first I would like to take a moment to reflect on anger.  While none of the Gospel writers say that Jesus was angry, we, the readers and commentators, assume that Jesus was angry.  As described in the account we have heard this morning.  Jesus took a radical and resolute act.   Jesus saw that something was obviously wrong.  So wrong that he intentionally made a whip out of some cord and “drove them all out of the temple – even the cattle and sheep” – and then overturned the tables and scattered the coins.  Jesus took decisive action in the face of things being wrong.  So, we assume that Jesus was angry and I am so glad we interpret it this way because we need to be angry.

Now don’t get me wrong.  I am not saying we need to express our anger in violent, aggressive or intimidating ways, nor should we suppress, ignore or dismiss our anger.  But we do need to be angry allowing ourselves to be alert to something being amiss.

Anger is an emotion that arises spontaneously within us.  Anger is neither right nor wrong, good nor bad.  If we believe that God is all things, then God is in anger!  Not quite the line my parents would have taken when I was growing up.  Hence, I learnt to suppress my anger.  After all Christianity lists anger as one of the deadly sins.

But fortunately, more enlightened people across the millennia have articulated a contrary view.  For this I draw on the work of Evelyn and James Whitehead in their book Transforming Painful Emotions.  Three centuries before Jesus, Aristotle described anger as the force that enables us to face difficulty.[i]  The “good tempered” person is able to draw on this energy – to become angry when injustices arise.  Deprived of this volatile energy we are unable to stand up to provocation; instead, in Aristotle’s words we “put up with an insult to oneself or suffer one’s friend to be insulted.”  Such a lack of spirit undermines our engagement in life.

Thomas Aquinas expanded on Aristotles optimistic view of anger.  For Aquinas feeling angry is normal:  “it is natural … to be aroused against what is hostile and threatening.”  In the end anger’s arousal may provoke courage, for anger is a “disturbance of the heart to remove a threat to what one loves.”  Beverly Wildung Harrison reminds us “We must never lose touch with the fact that all serious moral activity, especially action for social change, takes its bearings from the rising power of human anger.”[ii]

Without going into the physiology and psychology of it all, being angry empowers us in body and mind.  And anger is also a sign of hope.  We would not get angry if we did not believe that things could be different.

Yesterday was Mardi Gras and tomorrow is International Women’s Day so I am very conscious of how anger has fuelled the commitment of so many to right wrongs when confronted with injustice.  I think of the Mardi Gras 78ers, including Meredith Knight here this morning and then many at Pitt St since, have been upturning tables.

On the eve of International Women’s Day, I think of the multitude of women who are upturning tables.
– Brooke Prentis upturning tables every time she says, “these lands that are now called Australia.”
– Aunty Isabel Reid, NSW State recipient of Senior Citizen of the Year for 2021, and elder of the Wiradjuri people is upturning tables as she works tirelessly to raise awareness of the Stolen Generation to help prevent it from happening again.
– Grace Tame, 2021 Australian of the Year, who as a 15-year-old was groomed and raped by her 58 year old maths teacher, is upturning her tables as she used her voice to push for legal reform and raise public awareness about the impacts of sexual violence.
– Greta Thunberg upturns the tables in places of power around the world and inspires other young people to do likewise and (Muh loo luh Yoo sohf zai) Malala Yousafzai who upturns tables for girls in Pakistan.
– Brittany Higgins in recent months has taken radical and decisive action, upturning tables in the hallowed halls of Parliament House Canberra and I hope in every other institution, organisation and business that condones a culture of bullying, intimidation, harassment and abuse in any of it forms.
– And I suspect our new Minister Rev Dr Josephine Inkpin, together with Penny Jones, both of who we welcome into our community this morning, will continue to upturn tables both here at Pitt St and beyond.

Yes, we need to be angry.  We need to upturn tables and confront injustice.  Anger is a necessary disturbance, alerting us to an injustice that needs addressed or some boundary that has been transgressed.  Anger offers hope that things can be different.

But what about that other reason that Jesus may have acted as he did that day in the Temple?  Is Jesus challenging the very way that people were worshipping God and even their understanding of God?  Could Jesus have been saying that there was no need for the temple and animal sacrifices.  Was Jesus not cleansing of the Temple but rather saying the temple needed to be replaced?[iii]

Animal sacrifices were offered in part to keep God happy and prevent bad things from happening.  The interventionist God would respond positively to worthy sacrifices and an angry vengeful God could be kept at bay through sacrificial offering.

Is the writer of John’s Gospel, at the very outset, inviting not only a different way of worship but a different relationship with God, drawing us into intimate relationship with, not some angry deity in need of placating because of human transgressions, but rather the God that dwells in the temple of the human body.  As we have heard in verse 21 “the temple he was speaking of was his body.”  Jesus body is the Temple, our body is the Temple.  No animal sacrifices, no money changing is required but rather a reverencing and blessing of the Holy One we are.  In the words for Jan Richardson: “You are the Temple, sanctuary, home for God in this world.”[iv]  The very relationship that our call call to worship this morning invites us into.

The rest of the Gospel according to John, goes on to support this, as Jesus demonstrates his relation to God, whom he calls “Abba” and our relationship with both himself and God.

So, as we move into a few moments of quiet reflection, what will be different because you came this morning to this sacred place to hear this Sacred Text proclaimed?

[iii] See Sermons for Year B, Lent 3, 2012 and 2018 by Thomas and Laura Truby.  Word documents accessed from http://girardianlectionary.net/reflections/year-b/lent3b/