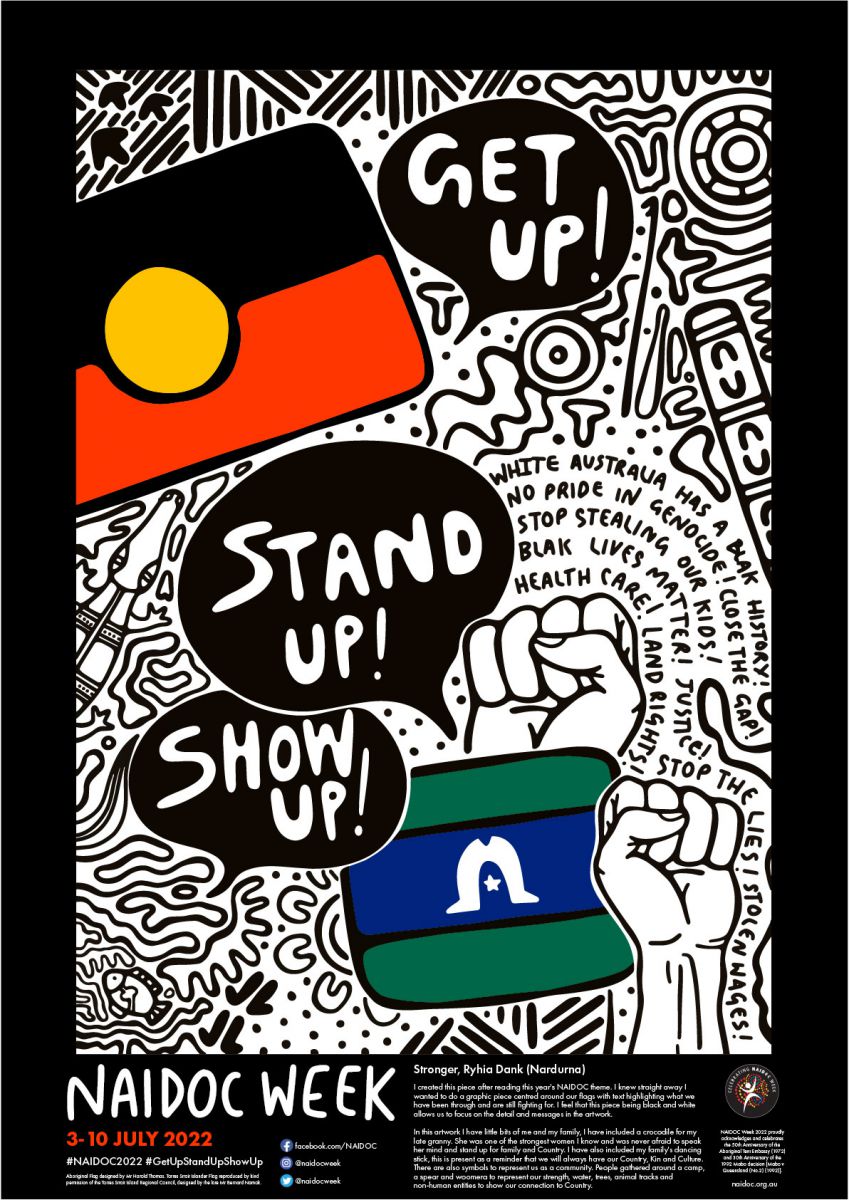 Yamma.  This is how my friend Geoffrey, a Gamillori man asked me to greet you as you listen to this NAIDOC week podcast.  I greet you from the land of the Bidjigal People, on the northern shore of Kamay, or as it is more widely known Botany Bay.  I acknowledge the original custodians of these lands we now call Australia.  I greet you on this first Sunday of NAIDOC Week 2022, when we recognise and celebrate the spirituality, history, culture and achievements of Aboriginal and Torres Strait Islander peoples.  Today is also the 14th Sunday of Ordinary Time, and our Gospel Reading comes from the 10th Chapter of the Gospel of Luke, verses 1-12 and 17-20.

On 29 April 1770, The Endeavour sailed into Kamay, as part of James Cook’s exploration of the Pacific.  Approaching the southern shore, Cook’s landing party was met by two Gweagal men with spears, surely an attempt to express sovereignty over the territory.  However, when communication failed, Cook’s party forced a landing under gunfire.  After one of their men was shot and injured, the Gweagal retreated, for their spears were ineffective against the British weapons.

Cook and his men then entered the camp.  They took artefacts, including a number of spears, and left trinkets in exchange.  Joseph Banks wrote: [We] threw into the house to them some beads, ribbands, cloths etc. as presents and went away.  We however thought it no improper measure to take away with us all the lances [spears] which we could find about the houses, amounting in number to forty or fifty.

Seven days later, after little further interaction with Aboriginal people, the Endeavour’s crew sailed away.  Cook wrote in his journal: ‘All they seem’d to want was for us to be gone.’  Despite knowing the land was occupied, Cook, in the name of His Majesty King George the Third took possession of the whole Eastern Coast.  This was just the beginning of the illegal, immoral, cataclysm that continues to reverberate across generations and is now our inheritance.

I grieve the unjust loss of land, taken without consent, compensation or treaty.  I recognise and honour the strength and resilience of First Nations People.  And I acknowledge that from the beginning the Spirt of God has dwelled with the First Peoples of this ancient land.

In offering this reflection I admit that I am conflicted.  Is it appropriate for me, as a white immigrant to these lands, to preach on this Sunday at the beginning of NAIDOC week?  It was most unfortunate that the group reflection that was to come from women in the Kimberly had insurmountable technical issues that rendered it unsuitable to form into a podcast and our networks were bereft of Aboriginal and Torres Strait Islander women to call upon respectfully at the 11th hour.  So it is with great humility that I embark upon the task.

The Gospel tells of Jesus sending out the 72 in pairs to all the towns and places he was to visit, saying “the harvest is rich, but the labourers are few.”  He reminds them that he is “sending them out like lambs among wolves.”  And that they are to “carry no purse, no haversack, no sandals.”

Until I was preparing this reflection, I had seen this text as a commissioning of missionaries to go out and proclaim the good news to the heathens such that they will come to know and experience the Christian gospel.  But I have been stopped in my tracks.  Is that not what has been done by colonisers, by missionaries who have come to these lands, and in particular evangelising Indigenous communities.  Now, with 21st Century eyes and decolonising insight, I recognise and name these destructive colonizing strategies.

Garry Deverell in Gondwana Theology says; “The movement of Christ’s gospel into the Indigenous communities of this country was and is far from straight-forwardly positive.”  He goes on, “There is a saying in Aboriginal and Torres Strait Islander communities: ‘When the white man came, he made an exchange – the bible for their land and the sea.’  Actually, it was far worse than that in most places.  It was the bible in exchange for our language, lore and kin as well.”

How it would be if we were to reimagine this Gospel passage as Jesus inviting 72 Aboriginal and Torres Strait Islander peoples to go out in pairs and take their spiritual insights and proclaim the Kin_dom of God to those of us who have come across the seas and settled on this land?  What might this look like?  Sound like?  Feel like?  Firstly, we would need to stop.  To listen to what the Ancient People of this Ancient land have been trying to say for 250 years but has largely fallen on deaf ears.

Despite what we learnt in school, despite what has been written in history books, our First Nations disciples have always been here.  For the last 250 years the Spirit of God, who has dwelled with the First Peoples of this ancient land, has been attempting to preach the Kin_dom to us colonisers.  But alas, far too frequently, they have not been made welcome and have needed to leave, shaking the dust off their feet.

So let us listen to just a few of those 72 sent out in our times.

Grace, an Aboriginal woman, whose voice would have been on our original recording for today, reminds us that in Aboriginal spirituality it is not about bringing knowledge to country but country sharing wisdom with us, so that being the seventy sent out is not just ‘what can we give to you’ but being open to receive .”

Grace’s words echo those of Miriam Rose Ungunmerr-Baumann, 2021 Senior Australian of the Year.  Miriam Rose in her acceptance speech lamented, “We have lived in this country for many thousands of years and 200 years ago we began to interact with white fellas.  Since then, we have adapted to a new way of living.  We learned to speak your English fluently.  For years we have walked on a one-way street to learn the white man’s, white people’s way.”  She goes on to say “I’ve learned to walk in two worlds and to live in towns and cities and even worked in them.  Now is the time for you to come closer to understand us and to understand how we live and listen to what the needs are in our communities.  When you come to visit or work in our communities and leave your comfort zones, I ask that you bring your knowledge and wisdom, but we ask you also to learn and understand how we live and function in our communities and listen to what our needs are.”

Lidia Thorpe, a Greens Senator from Victoria says that Aboriginal Women have been calling for safety, equality and respect for over 240 years and are still fighting for a voice at the table.  And I quote “Our struggle, our resistance, our fight and the ongoing oppression that our black women face is not seen on the front page of the paper.  It is not something that Australians seem to hear or even know about.  Australia has a long way to go.  We don’t have a treaty and we only need to look at the statistics of suicide, deaths in custody, removal of children.  That should be a crisis in this country but is usually just a one day, little headline in the paper, a left leaning paper and the rest is not talked about, it is not in peoples mindset to understand the history of this country and its implications of its impacts on First Nations People.”

Teela Reid, a senior solicitor, gives voice to two things she wants.  Firstly, for second nations people to walk with us to enshrine a First Nations Voice in the Constitution and join us in the call to action for a referendum.  And secondly to enable a process that allows elders and old people to come and sit at the table with judges and assist in decision making of defendants in Court.  She goes on “My hope is that Australians understand that it is now time to shake the system from its very core and that is not a bad thing.  These changes can only be embraced through the challenges of difficult conversations.  Because it is not about reconciliation.  This is about reckoning.”

The choice is ours- will we welcome the proclaimers of the Kin_dom, or once again will our First Nations People need to shake the dust off their feet?  Can we heed the call of the Uluru Statement from the Heart, addressed to the people of Australia, “We invite you to walk with us in a movement of the Australian people for a better future”?

“Get Up, Stand Up, Show Up,” is the theme of this year’s NAIDOC week.  The author, Anita Heiss says, “When I think of this year’s NAIDOC theme, I think of the Wiradjuri word, ‘dirrayawadha’ which means to ‘rise up’. I think this year’s theme is a call to ACTion to all – sign the Uluru Statement, buy Black products, read First Nations literature, use your own platforms positively to bring awareness to the causes that matter most to you.”

So I now invite you to take a moment to pause and consider how you will respond to the First Nations People that have been sent out “like lambs among wolves,” “carrying no purse, no haversack, no sandals”?  Will we welcome or shun our Aboriginal and Torres Strait Islander people as they proclaim the Good News?

I commenced this reflection acknowledging Country and the original custodians of these lands.  I want to conclude by acknowledging those who have welcomed me, enriching my awareness and understanding of the Kin_dom of God, particular the women I have quoted.

Our Alleluia verse accompanying this Gospel comes from Colossians Chapter 3 “May the Peace of Christ reign in your hearts and the fullness of Christ’s message live within you.”

So as we sing our alleluias may we receive this peace as offered to us by the Ancient Peoples of these lands we now call Australia.  Amen.

This reflection was part of the Australian Women Preach podcast series.  Check it out at  https://australianwomenpreach.com.au/